A Face Lift, an Update, a Manicure, and a Review

Today’s post is going to be quite substantial as it contains a backlog of reviews and even a manicure. There’s also a lengthy update about the page itself and my plans for the future. Polishes reviewed include Resurrection by Sally Hansen (Complete Salon Manicure) and Lollipop by Orly.

I decided to give my page a face lift and think it looks a lot better than before. It’s way less busy and more relaxing to look at. Hopefully other people like it as much as I do.

In addition to the face lift I have also decided to try editing my photos. I’m not using Photoshop or anything that can make crappy nails magically become beautiful but instead I’m just using frames and cropping tools. I’m also making images smaller so they load quicker and look more aesthetically pleasing.

Today I began receiving the polishes I ordered online last week. I got two butter by London polishes: Yummy Mummy and Artful Dodger. I’m really excited about how my collection is growing. I began collecting polish avidly in mid 2011 and roughly a year later I have about 200 bottles. It has been fun pursuing various brands and trying new things out and I look forward to continuing now that I have the time once more.

Down to business! First review is for Resurrection by Sally Hansen. It’s a part of their Complete Salon Manicure line that’s somewhat new (as in within the past year, I’m guessing). First thing’s first: The actual bottle is stylish and the handle is ergonomic. It actually has a little rubber grip which is great. I’ve seen similar grips on other newer polishes so this must be catching on. One more thing I like about it is how wide the brush is. It makes it incredibly easy to paint a nail in just three swipes which I love.

Resurrection is a beautiful stormy blue color with heavy grey undertones. Colors like this are honestly my favorite to use. My nails are constantly painted with blue/grey polish like this. The formula is lovely too. It’s certainly worth the $7.79 I paid at CVS for each bottle (I got three). Sally Hansen is definitely growing on me! 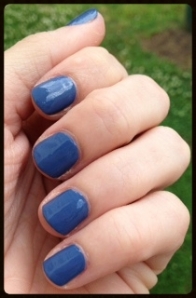 Next up is Lollipop by Orly. I only have three polishes and a base coat made by Orly so this is a brand I had really been wanting to look into. Lo and behold I saw some for sale at CVS the other day and decided to grab a bottle. Unfortunately they only had reds and pinks which aren’t usually my favorite colors. I did find a gorgeous lavender polish, Lollipop.  I have no problem saying this is great stuff and I would love to order some in the near future. The handle is made of rubber and makes it easy to grip and it comes with .6fl oz. of polish. (For comparison most bottles have about .4 or .5 fl oz.; Essie bottles contain .46fl oz. of polish, for example.) In other words one bottle will last for a while so even though Orly.

Lastly I am going to share a manicure I did last night. My base polishes were Pilates Hottie by Essie (lavender) and Timeless by Revlon (light grey/blue). The roses were done with Plum Luck by Sally Hansen (dark magenta) and Chic by Revlon (dark blue). I used Bundle Monster plate BM14 and a quick dry top coat by Revlon. This manicure is easy and fun to do and I wish I had gotten better photos of it. Of course moments after the photos were taken I accidentally hit something and ruined the whole manicure! Typical. (By the way, the photos should have borders but Photobucket hasn’t updated them yet. If they aren’t showing the original photos will simply be border-less.)

I have to give credit to imfeelingnail-venturous.blogspot.com because I used her February 27th, 2013 post as inspiration for this. Once I receive confirmation I will post photos of that particular manicure here. I don’t want to use her photos without asking first though!

Edit: So the owner of imfeelingnail-venturous got back to me and said it was okay to use the photo. Here’s my inspiration:

Phew. That was quite a post! I will be updating it soon enough to add photos of my inspiration for the manicure. Enjoy!

As of July 2013: I'm currently 25 and married to a wonderful Marine officer named John. As of January 2013 we live in Camp Lejeune, North Carolina. Together we have a 22 month old son named Jameson. I went to school at the University of Mississippi and am originally from Rome, GA. I have also lived in SC, VT, and VA. Last but not least I love anything having to do with nails and jewelry! This blog is entirely about nails and while I'm a total beginner it's fun all the same.
View all posts by rookienails »
← butter London
Late Night Humor →